​Performer, Master Instructor, Choreographer, Director and Producer, Jillina has devoted her life to dance. Currently Jillina is touring the world with her newest production: Bellydance Evolution. Created in 2009, Bellydance Evolution is a revolutionary approach to the art of bellydance; it is a theatrical show with a storyline, much like a ballet. Bellydance Evolution has already appeared in over 20 countries and was a featured performer at the Mawazine festival in Morocco, performing for the Queen of Morocco. Bellydance Evolution was recently commissioned to produce “Le Voyage de Scheherazade” a multi-national, multi-discipline collaboration between Moroccan, European and American Oriental and ballet dancers with the Orchestra Philharmonique de Maroc.
In 1999 Jillina established her own dance company, Jillina’s Sahlala Dancers, currently LA’s premier Middle Eastern and world fusion dance entertainment company. From 2003-09 she served as Artistic Director and Main Choreographer for the Bellydance Superstars and performed with them for over 700 shows in over a dozen countries. High-lights include performing on the main stage at Lolapaloza, The Follies Berger in Paris, The Queen’s Theater in London and Theatre Mohammed V in Rabaat, Morocco. Jillina continued in her position as principal choreographer until 2010.
Jillina pulls from a strong dance background in Middle Eastern, Folklore, Jazz, Ballet, and Hip Hop to create a colorful Middle Eastern fusion repertoire. She travels extensively, teaching seminars and performing in concerts. Jillina’s talents have taken her to over 30 different countries. Whether Jillina is coaching dancers individually or teaching a group of 1,000 students, she has a special ability to connect with people on and off the dance floor.
Jillina has won numerous awards from International Academy of Middle Eastern Dance and the Giza Academy, including Best Modern Egyptian Dancer, Best Instructional Video, Best Dance Company and Dancer of the Year. Jillina has appeared on a number of television programs, including, “Dancing with the Stars” & “Tsukiri” a widely viewed show in Japan. She has co-produced 12 instructional DVDs, which, due to their success, are now offered in 5 different languages and distributed by Universal Records. In the summer of 2009 and 2010, Jillina was the first American to be invited as a featured performer in the prestigious Closing Gala at Ahlan Wa Sahlan in Egypt.
Jillina is the owner of Evolution Dance Studios, located in North Hollywood, California, USA. The studio provides rehearsal space to some of Hollywood’s top artists- Beyonce, Lady Gaga, Choreographers from So You Think You Can Dance- and serves as a focal point for the Los Angeles Dance Community. 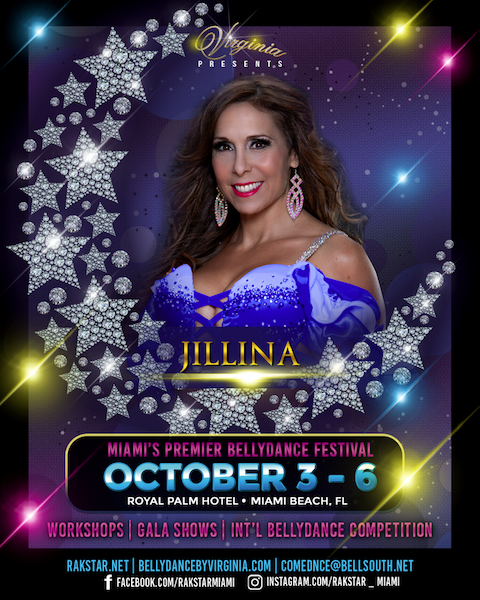